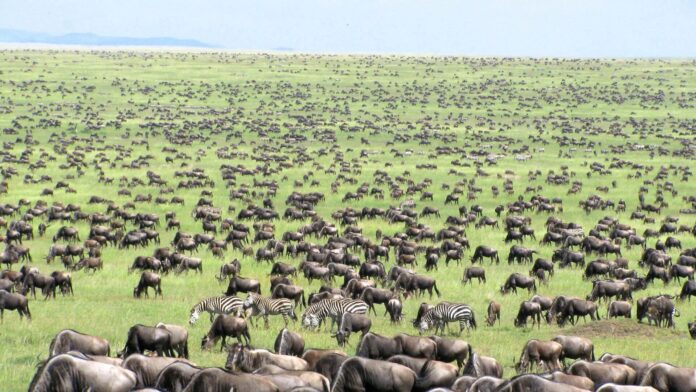 Serengeti is a home of the world-famous great wildebeest migration, the park is consistently ranked as one of the best national parks in the entire world.

While it is the farthest of the northern circuit parks from Arusha, the Serengeti is often the first inclusion on any Tanzania safari itinerary. With its sweeping savanna plains, towering rocky hills, and seemingly unending skies – the Serengeti is as much a stunning landscape as it is a place to see Africa’s most iconic animals.

The Serengeti is home to huge numbers of wildebeest, zebras, hyenas, lions, elephants, hippos, antelopes, and more. So large is the Serengeti that we strongly recommend a minimum of two nights in the park if you’re serious about doing it justice.

The Serengeti offers outstanding year-round game-viewing, but is particularly popular during the Great Wildebeest Migration when some 1.7 million wildebeest and another 500,000 zebras cross the Serengeti on their way to the Masai Mara.

The Serengeti is arguably the best place in Tanzania to see predators in action. With so many animals calling the grass plains home, predators’ numbers are high – especially for lions and cheetahs. It’s a rare safari to the Serengeti that doesn’t spot at least a few lions, and even cheetahs and leopards are not uncommon sightings. Other predators such as hyenas, serval cats, jackals, and even the occasional African wild dog can be found on the Serengeti.

While night game drives within the Serengeti National Park are not allowed, a sunrise game drive is an unforgettable way to see the park in a totally different light. Not only is the sight of the sun setting fire to the savanna something you’ll remember for the rest of your life, but the low light and cool air are perfect conditions for predators such as lions, leopards, and cheetahs to do their hunting.

A morning game drive can be added to any Serengeti itinerary, and you can then enjoy a late breakfast at your lodge before hitting the road again.

Starting before sunrise, you’ll be high in the air when the sun crests the horizon and lights up the Serengeti in brilliant red and orange. After your serene ride above the plains, you’ll settle out on the Serengeti for a champagne breakfast in the wilderness.

Playing host to the Wildebeest Migration in June/July and again from September to November, the Lobo Valley is a popular game-viewing destination year-round. Home to large herds of elephants and the Serengeti’s second largest lion pride, Lobo Pride, the Lobo region is a distinct geographical region boasting woodland and hilly kopjes.

The site of the dramatic river crossing from the Serengeti to the Masai Mara, the Mara River is a swollen body of water that proves a deadly barrier for the Wildebeest Migration as it seeks to cross into the relative safely of southern Kenya.

As if its strong currents weren’t enough to challenge the wildebeest and zebras attempting the crossing, the Mara River is also home to Nile Crocodiles only too happy to snap up a tasty treat as it attempts to get across the river.

While it is never possible to predict with certainty when the Wildebeest Migration will attempt a crossing, it provides a thrilling game-viewing experience for that patient (or lucky) enough to see it happen.

The site of the Serengeti’s less well-known river crossing, the Grumeti River nonetheless offers up exciting game-viewing as the river’s current and hungry inhabitants present the first major obstacle the Wildebeest Migration must pass on its way north.

Home to the yearly calving season in which hundreds of thousands of young wildebeest are born into the world, the Ndutu region of the Serengeti is where the Wildebeest Migration starts.

With the area particularly verdant during the early months of the year, it is the perfect place for expectant parents to birth and raise their young before embarking on the long, dangerous walk towards the Masai Mara.

Safaris wishing to see the Wildebeest Migration during January to March should include Ndutu on their itinerary if they wish to see the vast herd before it moves on.

All About Serengeti National Park